Well, the C++ Standards Committee doesn’t have your back. Oh, sure, they have introduced a digit separator, – ‘, but it’s completely unusable in production code! Here’s why.

As you can see, my blog’s parser does not handle this separator correctly, and I assure you, neither do many other parsers! Effectively, this means that your new feature’s code will be displayed incorrectly in your organization’s code review tool. And obviously no (even seemingly) incorrect code can ever hope to pass a review.

For an another example, let’s consider the following code:

What are the types of a, b, c and d? Hint: some of them are actually compiler errors, and you can’t rely on my blog’s syntax colouring.

And that’s why this digit separator is a complete failure.

If only there was a way to use _ as the separator, just like in D, Ruby, Python, C#, Julia, Ada, Rust and even Java…

Fear not, where the committee dropped the ball, I am picking it up! I created a great digit separator library. It’s very simple to use, just include the file:

This will allow you to use proper digit separators trivially:

Great, isn’t it? Obviously. But there’s a small caveat: due to buggy compiler implementations, I had to split the implementation of digit separators for billions into separate files. Apparently, they can’t handle large files. Ridiculous, I know, but what can you do?

So, if you want to test larger numbers, you have to use additional headers (header numbers respective to millions):

Of course compiles with no errors. What a success!

Where can I get it?

The library is rather large: 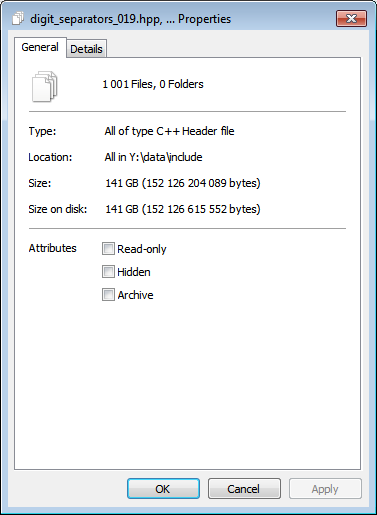 Unfortunately, GitHub, Bitbucket, GitLab and other git providers proved to be really backwards with their silly repository size limits, so I couldn’t share my library through their services. But you can download it here (full archive) and here (separate headers).