Why would you do that to yourself?

A few weeks ago Gynvael Coldwind announced a contest (I’m sorry, the link is in Polish) related to his excellent OS dev streams (again, in Polish, but if you do understand it, definitely consider watching them). The task was simple: make a BIOS-bootable diskette image with the prettiest graphical effect; all in 16-bit text mode, with binary size limit of 512 bytes.

It’s as simple as providing the right target to clang, right?

Aesthetics isn’t exactly my thing (as one could conclude from perusing this blog), but I decided to try and see if I could write an entry in C++, using newer standards freely. As it turns out, both gcc and clang claim to be capable of generating 16-bit code with the -m16 switch.

Let’s give it a try:

Compiled with the following (actually, I tried g++ and clang++ with -Os and -Oz and chose the smallest binary every time):

The 8-byte mov instruction looks really suspicious (and is terrible for the contest, taking 1/64th of the available space). When tested with BOCHS, it simply doesn’t work — at least not while still booting. Moreover, it doesn’t look at all like the Segment:Offset addressing the 16-bit code should be full of. A quick look into the documentation solves this particular mystery quite easily, though.
Clang:

The generated code and the ABI remains 32-bit but the assembler emits instructions appropriate for a CPU running in 16-bit mode, with address-size and operand-size prefixes to enable 32-bit addressing and operations.

The -m16 option is the same as -m32, except for that it outputs the .code16gcc assembly directive at the beginning of the assembly output so that the binary can run in 16-bit mode.

Working around the compilers

Okay, so it turns out it’s not possible (or I don’t know the magic switches) to have either of those compilers generate truly 16-bit code without a medium-to-major time investment of writing the backend myself. I don’t claim to know nearly enough about this topic to discern the cause of this peculiar behaviour, but for my purposes, knowing that another way had to be found was sufficient. What about the asm blocks?

Unfortunately, this could hardly be called a C++ solution, not when it’s a thinly veiled assembly implementation and any normal pointer data access is impossible, because it would generate 32-bit instructions. What is more, attempting to use different segment registers would require rewriting the code or applying an ugly macro (or, possibly in C++20, using something akin to string mixins from the D language). I went with a macro.

It’s far from ideal, but it was a workable start:

After special-casing the text mode video buffer a readable hello world can be created: 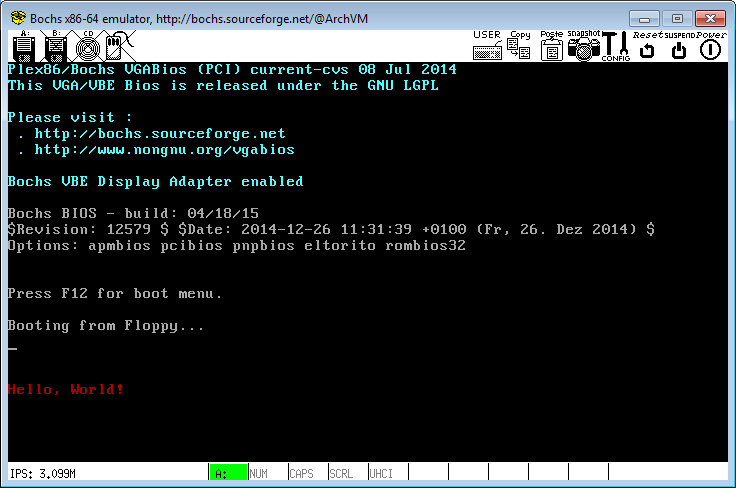 With help in the form of Ralf Brown’s Interrupt List, creating an abstraction over keyboard input was simple:

Since, as is written above, using standard C/C++ pointers was not possible, I created an abstraction over the SegmentedAddress class templates.

It worked, and it worked well — the class compiled down to nothing and the resultant abstraction was fairly readable (but it could be better):

The source and the binary are available here; the mechanics of the snake game are trivial and I’ll skip them. With clang++ and -Oz the resultant binary had exactly 512 bytes. That means it passed the contest criteria — if only just. Although I had to forego adding the proper boot signature bytes at the end.

Since the contest was about creating a pretty graphical effect, my work didn’t win. In fact, it was the ugliest one, although it may have had a chance to win in the “most interesting” category. At least in my opinion.

On the other hand, the quality of works sent by others was just jaw-dropping, even for someone passably familiar with the scene. You can see them all + sources here. The two best entries can be seen in action here and here. The reader is reminded that these works have not left the text mode, nor have they gone over the decreed 512 bytes.

Gynvael will be testing the waters with an English stream about “a CTF challenge or two, probably exploitation or reverse engineering” on July, 15th, at 19:00 UTC+2 — more info on his blog. Given the quality of his Polish streams, I urge you to check it out.