This is my first English post in a long while, I hope I am not too rusty.

With the increasing probability of your average project using at least C++11, std::unique_ptr is one of the most popular solutions1 to dynamically managing memory in C++.

It usually goes like this: if your object can’t be a scoped object, that is one with automatic lifetime (colloquially: on the stack, or a class’s member), wrap it in std::unique_ptr. This will ensure it’s freed when it finally goes out of scope. Herb Sutter goes more in-depth into this topic in his last C++Con talk:

This advice is sound and deserves being spread.

There is, however, a slight problem with how this gets expanded when it comes to using std::unique_ptr to guard lifetime of types requiring a custom deleter. Very often the resource held has its own deallocation function, be it fclose for FILE, FreeLibrary for WinAPI’s HMODULE, or something else entirely.

Despite the function being known at compile time, the vast majority of examples (to name a few: the first google result for “how to use unique_ptr custom deleter” and the original Rule of Zero article) suggest using a function pointer as the deleter type and supplying the specific (constant!) function pointer at runtime:

Or, as a class member:

It is not an empty statement either – all the standard libraries of major compilers implement this: clang, gcc, msvc. The following code does not compile with any of the aforementioned:

In many cases, this characteristic makes std::unique_ptr with function pointer deleter unusable in containers: an std::array‘s elements must all be fully initialized, std::vector‘s resize() is unavailable, and so is std::map‘s operator[].

Disabling useful functionality – for no good reason – alone should be a deal-breaker, but there’s more:

On all architectures readily available to me2, the following assertion did not fire:

The explanation for this behaviour should be fairly obvious: after all, the function pointer is additional state and – in theory – it could be anything. That being said, the 2× ratio is not defined, although it is a safe assumption on any modern architecture I can think of.

What’s more, it could be changed at runtime:

The above example is artificial. In the vast majority of cases the function is constant and will not be changed throughout the program execution. Let’s consider yet another artificial example – a std::vector of evil, as defined below:

On my system, the vector‘s allocated memory is laid out as follows: 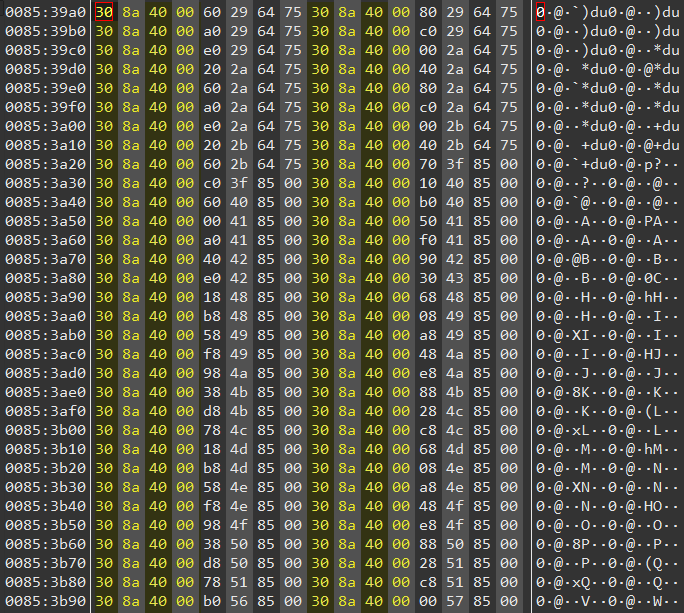 Can you guess what the values highlighted to yellow are? Well, at this point I don’t expect there’s much guessing going on. You’re right, they’re all addresses of fclose – 0x408a30. Quite redundant.

While I don’t think there’s a noticeable difference in performance speed-wise[citation needed], at least as long as the size of such an array is small enough, there’s clearly a pessimization of space efficiency. Doubling the size of a pointer is in many cases a deal breaker, as it could cause even larger problems if placed within a structure next to members with high alignment requirements.

In my opinion, had the doubling of size been a true necessity, it would be an understandable reason to steer away from std::unique_ptr, especially on memory-constrained architectures.

Fortunately, there’s no need to eschew std::unique_ptr in such cases. In fact, even one of the less upvoted answers to the StackOverflow question touches upon this: create custom deleters that do not need to keep any state:

Now, the usage is very similar, but all of the above problems are absent. It is default-constructible with a sane value, so it could be said that it makes std::unique_ptr‘s constructor great again:

Furthermore, any compiler worth its salt will use empty base optimization to ensure that the size of std::unique_ptr with a stateless deleter is exactly that of a pointer. This is especially unlikely to be untrue, since the standard library uses a stateless std::default_delete to call delete and delete[]. The following assertion holds true on all platforms and compilers available to me2. Nothing exotic has been tested, though.

Finally, there’s no need to provide the secondary argument to the std::unique_ptr‘s constructor – the deleter is default-constructible.

To put all of the above to a test, let’s try again, with a std::vector of good:

The values highlighted yellow are addresses of fclose, in this run 0x408a18. Yes, there are none; that’s the point.

In this battle of good vs. evil, evil definitely comes off worse.

Making your life easier with templates

Some could say that writing a deleter class for every resource is quite a mouthful, although I dare anyone to tell me that having to pass function pointer to every instantiation is better. That being said, one could avoid having to define a class for each deleter, for example with the following function_caller template:

It would be used as follows and it would have all the desired characteristics of std::unique_ptr with BarDeleter:

Since this is virtually equivalent to the above example of good, I will not insert duplicates of the same snippets.

Finally, with C++17 you can use auto template parameters:

Then good can be defined as follows:

That being said, it stops being that pretty when an overload needs to be selected.

What if I actually need state?

In any case, if you’re going to create a stateful deleter, consider making it default-constructible, to prevent problems described above.

std::unique_ptr is a great and versatile tool, well-deserving its ubiquity. Unfortunately, some internet advice regarding its more advanced usage is, at best, questionable. I hope that this post will be found helpful, especially to those disheartened by apparent deficiencies of custom deleters.